Las Vegas is a great city but there are definitely a lot of tourists! Nightlife, music, entertainment, dancing, gambling, and walking along the strip…. These are typical Vegas things to do, but I want to show you the Las Vegas secrets and hidden gems!

Las Vegas was recognized in 1905 and formally developed into a city in 1911. It ranks as the 28th most populous city in the United States. Globally it is well known chief resort city with enough entertainment industries. It is the entertainment capital of the world and has enormous casino resorts, thus admired by the film industry. As a huge tourist destination, Las Vegas has a range of unique things to do, and many of them are quite WEIRD! Whether it’s your first trip to Vegas or your fiftieth, straying from the Strip is always a good idea.

In the beginning, it was started with a small group of members as the Las Vegas Art League and grown to the current Las Vegas Art Museum. It covers about 8,000 Sq.ft of the Lorenzi Park. It dedicates to display its top exhibit and striking fashionable shows.

The exhibits are marvelous and display life style from the ice age to the current day, from historic wildlife to life during nuclear testing. Explored the Nevada State Museum located at The Springs Preserves in Las Vegas, Nevada. This museum provides information of the Nevada state’s history. Displays of animals, fossils, rocks, minerals, artifacts, and historical figures can be found within the Nevada State Museum. If you are ever in Las Vegas, please be sure to swing on by for an adventure.

The displays give a brief explanation of how Las Vegas defeated the hard situation by their faith, hope, willpower, and talent. Once Las Vegas was an Oasis, with enough grassland and flowing water, and became the best location to spend leisure. The Old Mormon Fort is located at the corner of Las Vegas Boulevard and Washington Avenue, a location that 19th-century settlers handpicked.

See also  Mandalay Bay Brings the Ocean to You

It is a specially designed commercial light Boeing 727 which creates weightlessness for the passengers. It starts from the Signature Air Terminal, McCarran International Airport during the month of April. The service is provided by Zero Gravity Corporation and the ticket charge is not economical.

An entertainment complex includes a lot of amusement programs such as skeeball, hockey, the latest ride simulators, and classic video games. It covers an area of about 200,000 square feet.

The street is attracted by the Viva Vision canopy and light show. The canopy is about 90 ft height and its length is about five football fields with 12 million LED modules and 555,000 watt sound systems. The massive LED screen at Fremont Street Experience has undergone a $32 million upgrade, but that’s not all. There’s all new visual content in the works, to be officially unveiled on New Year’s Eve. These cutting-edge 3D graphics are the next generation of entertainment on the world’s largest video screen, 90 feet above the world’s ultimate street party in downtown Las Vegas.

A marvelous fountain show at Bellagio Hotel, attached with sound and light. The Fountains of Bellagio is a vast, choreographed water feature with performances set to light and music, estimated to cost $75 million. The fountains are set in a 9 acre, manmade lake in front of the Bellagio hotel. I recorded this video a few weeks ago and added color with Sony Vegas.

Gallery of Fine Art at the Bellagio

The gallery exhibits artworks from museums and private collections.

An amazing view from this point attracts the visitors. It is also possible to dine at a restaurant located in the tower.

The Volcano Eruption at the Mirage Hotel

An outbreak of Volcano can be observed at Hotel Mirage. It starts at 6pm to 11.30pm occurring with the time-lapse of 15 minutes.

We can view the world’s largest gold piece at the Golden Nugget Las Vegas Hotel.

The museum exhibits things that deal with the pianist. It presents an awesome sight and the entrance fee is $6.50

The Diving through the parachute over 10,000 feet in air presents a marvelous picture of the beautiful city.

It is heaven for car fans. It exhibits the world’s major and best collection of traditional, classic, and special cars.

Big Shot at the Stratosphere

The thrilling ride takes us to 160 feet up in 2.5 seconds and drops back even in lesser time. Take a Ride on the Big Shot ( Worlds Tallest Free fall / Thrill Ride) at the Stratosphere hotel & casino in Las Vegas, Nevada. 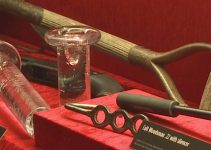