We start our day off at the airport and fly into Boston. One of the places we all wanted to visit on our trip to Boston, was the historic town of Salem, Massachusetts. Famed for the Salem Witch Trials, we wanted to see for ourselves whether this New England town is living in the past. We decided to travel to Salem via the Salem Ferry, but you can get there via the underground. With such gorgeous sunny weather, we think we picked the perfect transportation.

As you leave the marina you get a great view of downtown Boston. I have a bit of a thing for American skylines and so for me, this was the best way to capture Boston’s skyline. The journey, to Salem, took us just about an hour, and along the way, we saw some fabulous New England mansions.

The arrival at Salem is not quite as dramatic as it was leaving Boston, although you are greeted by a lovely marina. Our guide also told us that there are plans to redevelop the Waterfront District part of the town.

Once off the boat, we walked for a few minutes and we were at the start of the main part of Salem Town. Salem got its name in 1629 which translated is Shalom Hebrew for Peace.

As we made our way along Derby Street heading into town, we passed the Salem Maritime National Historic site, which is situated on Derby Wharf. In the 18th century, Salem developed into a major fishing, shipbuilding, and maritime center. Samuel McIntire, a local architect, and woodcarver was responsible for the majority of Federal-style architecture and ornamental carvings around the town and on the ships. The tall ship Friendship which you pass is still under construction but is a replica of a 1797 East Indiaman merchant tall ship.

We were heading to the Salem Witch Trials Memorial and the Old Burying Point Cemetery. I’m not sure you would get me visiting here at night time, but in the middle of the day, I felt quite safe. There was a guide at these who gave us a little history of the trails and who were buried in the cemetery. The Salem Witch Trials of 1692 happened due to the daughter and niece of Reverend Samuel Parris becoming ill. William Griggs, the village doctor, the diagnosis was of bewitchment put into motion the forces that would ultimately result in the hanging deaths of nineteen men and women.

I was making my way to the historic Philip’s House and my wife wanted to go to the Witches House. Before we headed off in opposite directions, we stopped for lunch and a quaint place called Lobster Shanty. We didn’t have lobster, but the food was great and so was the service, fully recommended.

We parted at Summer Street, I carried on along Chestnut Street where we saw some fabulous New England houses. I could have lived in them all, with their perfect colonial style.

Along the way, we came across Monroe Street and I was sure this would be the street I would live on. We found Philip’s House, situated in the McIntire Historic District, which preserves how the Philips family would have lived in the 19th century.

As we made our way back to rendezvous with my parents, we once again marveled in the gorgeousness of the houses and tree-lined streets. We passed the Salem Public Library and a number of churches, including the first church in Salem. Also, The Peabody Essex Museum is the oldest continually operated museum in the country. It was founded by sea captains in 1799 and houses collections from around the globe. It is here that you can see the model of the Friendship used to recreate the ship above.

We loved the Witches House. This 17th-century house has been preserved to show how a ‘witch’ lived. It is the only building with direct links to the Salem Witch Trials. These days it is positioned on a very busy junction in the downtown district.

We wander back through town down the pedestrian mall and came across quite a few lovely foodie shops. I stopped off and had the most divine ice cream.

While my wife was keen to visit Ye Olde Pepper Companie, which is still making candy the traditional way. She couldn’t resist the chocolate skulls.

There are lots of souvenir and thrift shops as well as boutiques along Derby Street. To me, they are typically American in one level wooden premises. I love these kinds of places, you find them all over New England. There is still so much history it is hard to tell that in 1914 a fire swept through the whole town and destroyed 400 buildings and left 3,500 families homeless.

We all had a thoroughly enjoyable and enlightening day in Salem. As we had visited on a Sunday we had to be back on the boat by mid-afternoon but felt we had got a real flavor of the town and were glad we made the journey. We ended our night with a Salem Ghost tour, which was very entertaining & spooky at the same time.

As we made our way back to Boston we started to talk about the ghost tour that we were going to be taking that night. We had set ourselves up for a real spooky day! 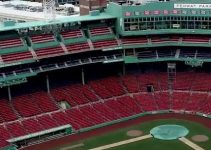